Fava beans and a nice chianti…

The fifth largest meteorite ever found in East Antarctica was discovered Jan. 28 by an international team of meteorite hunters. (Photo: International Polar Foundation)

Meteorite hunters at the bottom of the world bagged a rare find this southern summer: a 40-pound (18 kilogram) chunk of extraterrestrial rock.

A team from Belgium and Japan discovered the hefty meteorite as the members drove across the East Antarctic plateau on snowmobiles. Initial tests show it is an ordinary chondrite, the most common type of meteorite found on Earth, Vinciane Debaille, a geologist from Université Libre de Bruxelles in Belgium, said in a statement.

“This is the biggest meteorite found in East Antarctica for 25 years,” Debaille said. “This is something very exceptional. When you find such a meteorite on Earth, it means that when it was in the sky, it was much larger.” [Images of the Antarctic meteorite.]

The Russian meteor that burst into fragments above the Chelyabinsk region on Feb. 15 is also an ordinary chondrite, according to initial tests by Russian scientists.

Every year, scientists travel to Antarctica to search for meteorites. Their charred black crust stands out starkly in the white snow, and the cold, dry climate helps preserve any organic chemicals inside the rocks.

The expedition collected 425 meteorites in 40 days, with a total weight of 165 pounds (75 kg). Debaille said they may have found one Mars meteorite and one piece of the asteroid Vesta among the many discoveries.

The researchers canvassed the Nansen Ice Field, 86 miles (140 kilometers) south out of the International Polar Foundation’s Princess Elisabeth station. The United States also sent scientists out on the polar ice to collect meteorites this season, from McMurdo Station on the opposite end of the continent. 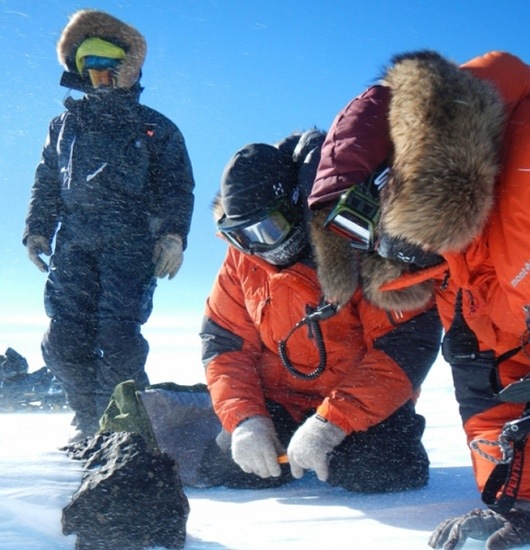