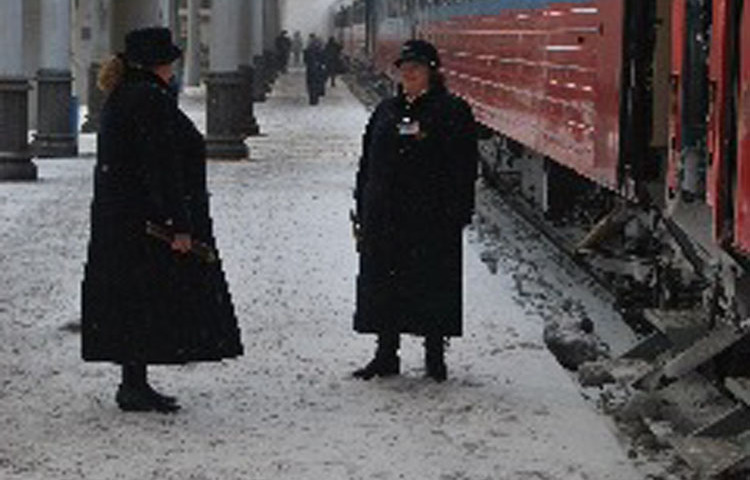 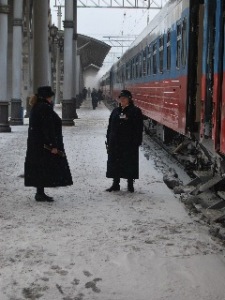 Today is my last full day on board the #2 Moscow-Vladivostok train and there is a touch of cabin fever in the air.  The carriage is comfortable and warm and, because it is low season, not particularly overcrowded.  However, there are limited opportunities for exercise and increasingly whenever the train stops there is a rush to pull on boots and spend a few minutes walking the platform in the fresh air (fresh in this instance meaning minus 15).

This is a retail opportunity not lost on the babushkas who patrol the platforms selling staple foodstuffs to passengers – bread, jam, water, beer, cigarettes and pot noodles are all freely available so it feels pretty much like a 7-11 in Earls Court (minus the lads’  magazines and the rizzla reds).  Occasionally there is the additional opportunity to buy an exotic dish-of-the-day which, today in Omsk, are smoked fish the size of fire extinguishers.

One old lady dangles a bunch of the brown Tyrannosaurus-Kippers in front of my nose and extols their virtues in Russian.  When I look uncertain she gives me a winning smile which is a bit scary because her teeth are made entirely of gold – she looks like Jaws’ mother.  I can only assume that the smoked fish market is very buoyant or that there is a glut of cut price dentists in Omsk.  I buy a loaf of bread and get back on board to consider food.

In 1880, Kate Marsden, a nurse who clearly had some cojones, left England by herself to set up a leper colony in the far Eastern provinces of Siberia.  She recorded in her journals that she packed ‘a few boxes of sardines, biscuits, some bread and tea’ which, by happy coincidence is pretty much exactly what I have brought with me and which is working well.

However, obviously caught up with romantic notions of an expedition to darkest Siberia I have also brought a number of freeze dried meals.  These are meant to be reconstituted with hot water although the packet says ‘can be eaten cold in an emergency’ – in an emergency! This is the sort of essential equipment carried by serious people who have emergencies!

In a rush of blood to the head I bought four packets of vegetable tikka and vegetable risotto varieties.  I feel very rugged.  Unfortunately they taste like a by-product of the glue making industry.  I can be pretty confident that  I will be bringing the other three home with me to be put in a cupboard and only consumed in the most dire emergency of the nuclear fall-out; killer-pandemic variety (and even then I may consider eating one of the children first).  So I sit in my cabin and cut black bread and spread marmite with my Victorinox special edition Swiss Army knife which restores a certain level of manliness.

This morning we entered Karsnoyarsk Krai and the flatlands have given way to densely wooded, steep hills as far as the eye can see.  The last three days have been a terrific opportunity to see the country, do quite a lot of writing and consume several paperbacks but now I have an urge to get off and mingle with the countryside.

I sense the same feelings in my fellow passengers who are now actively seen consulting timetables and counting off the stations to Irkutsk.  The other unspoken issue is that, after three days of sharing two small washbasins with 11 other people, we are all starting to niff a bit and if we don’t get somewhere with a hot shower soon then I am going to have to buy some of those kippers to mask the smell.