Allan Boroughs is in the jungle – he may be some time…

In 1908 the adventurer, explorer, cartographer, fellow of the Royal Geographical Society and occasional spy, Perceval Harrison Fawcett, visited the great sandstone plateaus of the Franco Ricardo hills in Bolivia.  Of the plateaux he wrote, ‘they stood like a lost world, forested to their tops’. Fawcett’s descriptions so impressed the young Conan-Doyle when he heard them that he immediately set about writing ‘The Lost World’.  (No not that one).

Wind forward a hundred years or so and I find myself preparing to follow in Percy’s footsteps.  Not quite to Bolivia where drug cartels and a rumbling border war make writing research a tad risky, but to the equally daunting flat topped tepui mountains of Venezuela.  Our objective is the top of Mount Roraima which the locals believed to be the stump of the world tree and which the newly arrived white Europeans considered to be unscaleable and, quite likely, still inhabited by dinosaurs.

Despite my admiration of Percy Fawcett I have no great desire to follow too far his footsteps.  Quite apart from his encounters with previously uncontacted cannibal tribes he wrote frequently of the dangers of huge leeches, anacondas and ‘great balls of jumping ticks that fall out of the trees’.

I can say with some confidence that I am unlikely to be eaten (by people) in modern day Venezuela eaten by balls of jumping ticks however remains a distinct possibility.  With this in mind I have been skin-testing several brands of super-strength, jungle-formula insect repellent to see if it brings me or my travelling companion out in festering hives.

It is a daunting prospect, the packaging contains the sort of warnings normally reserved for nuclear waste.  “Keep out of reach of children, keep away from food, do not allow to contaminate water supplies, avoid discharge into the environment.  May cause rash, blistering, suppuration, nausea, dizziness, fainting.  Will melt rubber and plastic.”

It also adds (unhelpfully) “in case of allergic reaction to our jungle strength formula, please consult your GP.” – clearly untroubled by the notion that ‘jungle’ and ‘your GP’ are words seldom found in the same sentence.

I travel, as always, in search of adventure, as research for a book (as yet not fully formed) and for the same adrenalin, unpredictability and general scariness that always makes for good memories.  For me there is always a sense that, when things stop going to plan is when the adventure is most likely to start.

However, as any Edwardian gentleman explorer will tell you, there is no excuse for taking uneccesary risks.   So now I consider my tube of undiluted toxic insect poison carefully.  Am I really happy to smear this toxic sludge on my skin simply to avoid being eaten by a few blood-gorged jumping ticks?

Bloody right I am! 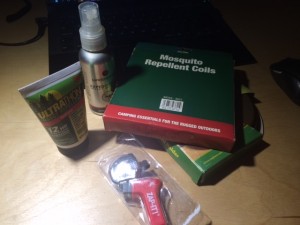 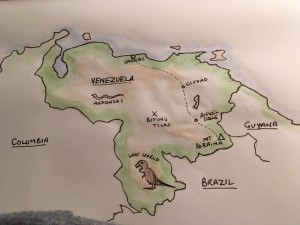