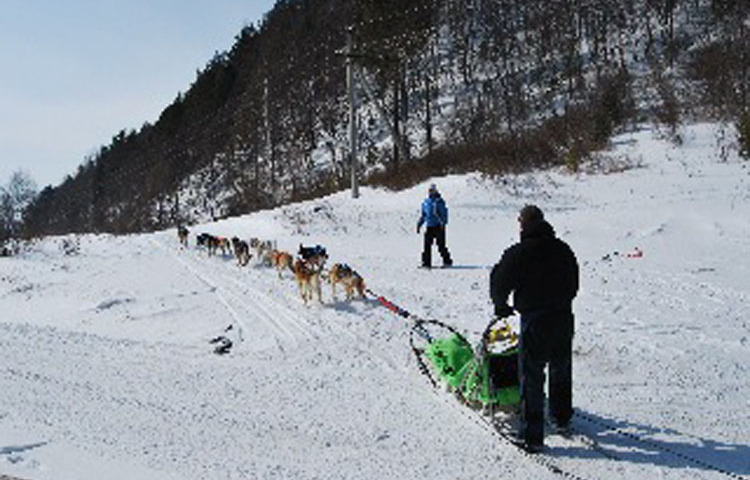 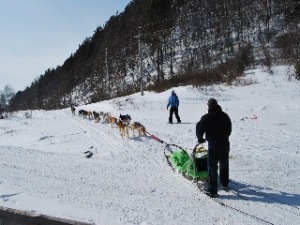 The dog sledging centre is based in the valley high above Listvyanka in the heart of the pine forest. The centre is run by Natasha and has around 30 dogs; large husky type things with blue eyes and foot-long tongues and mouths set into stupid cartoon grins. Natasha is clearly a dog person; I see her smiling quite a lot, just not at any another human beings.

Selecting the dogs to put on the sledge is hilarious – every dog in the place howls, barks, wags and bounces to get noticed and somewhere in my head I can hear Eddie Murphy’s voice shouting “pick me, pick me!”

“Hi, I’m Nikolai, you stand here, to steer left lean this way, steer right lean this way, brake is here, ok have fun!” Whoa, wait a minute, you expect me to drive this thing? This vehicle only understands Russian and it eats meat – I’m not sure I can build much rapport with it. Fortunately Nikolai is in the front seat and controls the dog team (mainly with a lot of shouting) while I stand on the runners at the back and concentrate on not falling off (not entirely successfully).

It is interesting to watch the team operate. There are seven dogs; three pairs and a lead dog in front. Lead Dog’s role carries certain privileges, for a start he is the only one on the team who doesn’t have to spend the whole time with his nose in someone else’s butt. In return he is expected to set the pace and direction and keep the main rope taught so the other dogs remain evenly spaced and pull steadily.

That is a lot of responsibility to place on a dog and, inevitably, 15 minutes into the ride, Lead Dog gets distracted by an interesting tree (hey, it’s a forest I’m a dog OK?). Immediately the line goes slack and there is an outbreak of yelping, pooing and butt sniffing in the ranks.   Lead Dog is no longer in control and the sledge grinds to a halt – he stands looking bashful like someone who knows they screwed up.

Nikolai is out of his seat and shouting, untangling and thumping until they form up into a proper line.  But they have lost momentum and it takes huge effort and energy to get them going again because, frankly, they’d all rather stop here and lick their balls. 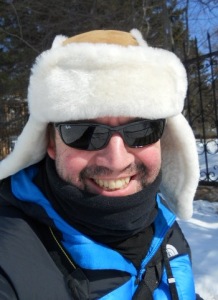 Eventually Nikolai restores order; Lead Dog gets his act together and the team is a team again.  The sun is out in the forest, there is fresh powder on the ground and this is quite the most beautiful day so far.  We get back without further incident – the key to Lead Dog’s success it seems, has been to keep out in front and keep the rope taught; something most humans have yet to learn.