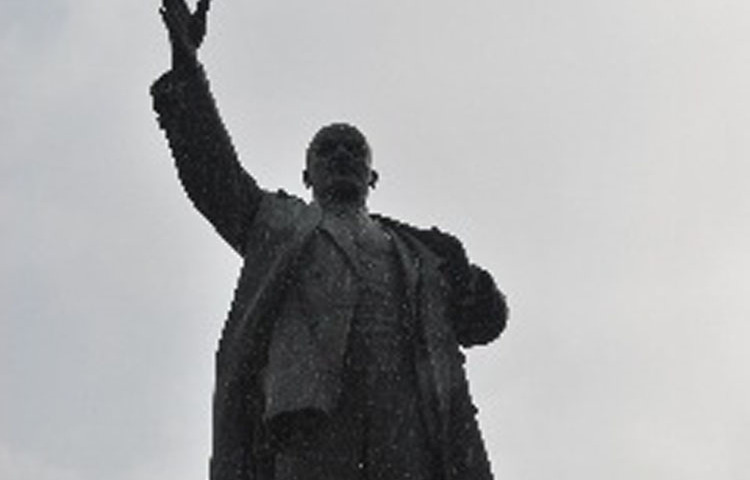 I spend the day  in Irkutsk before catching the train that takes me to Ulan Ude and then over the Mongolian border to Ulaan Baatur.  Irkutsk is a mixture of styles – originally a fur trading post, then a gold town then a cultural centre for the exiled Decembrists and finally an industrial jewel for the Soviets.

It is crossed with broad boulevards and a wide promenade around the banks of the Angarra where it is so cold that my breath freezes Shackleton-like on my scarf and my camera solidifies into an unusable lump of hardware.  Despite the extreme temperature the standard clothing for women here comprises extremely short mini dresses and boots, making it feel a bit like Newcastle city centre on a Saturday night.

In the Baikal museum, there are exhibits showing the indigenous, cod like fish, called the Omul that is unique to the region.   I decide to do what most human beings have done through the ages when they meet a new species and have some for lunch.  They are thick and meaty, not unlike sea-bass and I eat them with borscht; beetroot soup with onions, potatoes, sour cream and enough garlic to take out a squadron of vampires.  I contemplate pouring some into the camera which has now become an expensive piece of excess luggage.

Once again I am intrigued by the Russian insistence that nearly every every public space should be filled with music – preferably very bad Europop played at a volume to induce bleeding from the ears.  Most restaurants, even quite expensive ones, continuously blast Russian branded MTV where the songs have titles like ‘Nikky-Nakky-Noo’ or ‘The Bip-Bap Song’ and are sung by either young blonde women in gold lame or, strangely, middle aged transvestites in gold lame.

I eat quickly and retire to my hotel, mindful of my early start.  When I get to my room the restaurant downstairs is playing the Nikky-Nakky-Noo monster-dub-drum-and-bass-party-mix which continues  for the next 3 hours.

4.30 am finds me bleary eyed and freezing bloody cold, watching the driver load my bags into the car.  Clearly I look like I need cheering up so, on the drive to the station he puts on his own personal favourite; a collection Eurovision hits played on the pan-pipes.  I am in purgatory and hoping the Mongolians enjoy their meals in monk-like silence.