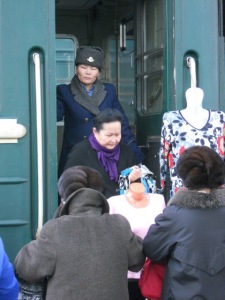 The Trans-Manchurian line runs from Irkutsk to Ulan Bator and on to Beijing for the next leg of the journey.  The rolling stock is considerably older and maintains a certain old-world charm such as a coal furnace on every carriage and toilets that empty directly onto the tracks. (In the depths of winter passengers are strongly advised not to remain seated while flushing as a sudden blast of air at –30C has the capability to freeze solid anything in its path.)  In addition, crossing between carriages needs a certain Indiana Jones quality as the tracks are fully visible beneath the ice-covered walkways.

The train navigates around the southern shoreline of Lake Baikal and first stop is Ulan Ude, capital of the Buryat republic and the centre of Russian Buddhism.  Clearly this place was something of a backwater during the Soviet era as the local mayor described an official visit from Princess Anne in 1990 as ‘the most exciting thing to have happened in Ulan Ude since Ghengis Khan rampaged through in 1239’

Clearly this is not a town that gets out much, however the area does offer the visitor the exciting prospect of a devastating earthquake at any moment – the last major one having tipped 9.5 on the Richter scale.  Ivan tells me that such earthquakes are very rare and only occur every 50 years.  Unhelpfully, he is unable to tell me when the last one was.

The train is crammed full of travelling merchants returning to China and their goods seem to occupy every available inch of cabin space, including the corridor and the toilets. Within 30 seconds of arriving at a station every trader on the train has disembarked and a fully fledged market is in progress.  Items for sale include overcoats, cheap shoes, jeans, jumpers, costume jewellery, trousers, blankets, slippers, leather jackets and track suits – men are modelling women’s clothing and some have even brought their own mannequins.  Top dog in the market today seems to be the man selling fluorescent orange raincoats – they look like something you would wear at a road-diggers convention but the public seem to love them (presumably the same public that loved Princess Anne).

An hour later we begin the long slow process of negotiating customs and border control for the crossing into Mongolia.  This all seems painfully familiar and my cabin is, once again,  visited by an endless procession of customs officers, border guards, public health officials and sniffer dogs all trying to outdo each other with stern looks and impressive uniforms.  I am also visited by a very nice man who offers me 800 Tugriks to the Pound.  (Interestingly Mongolian money smells strongly of sheep fat although I am uncertain whether this is to do with how they make it or where they keep it.)

To occupy the time I turn on my PC and, by the miracle of modern communications, discover that the last major earthquake in Ulan Ude was 52 years ago.  I hanker for a simpler age.